From Cave Dwellers to Classroom Decomposers

As you can see from this brainstorm of descriptive words related to “waste”, 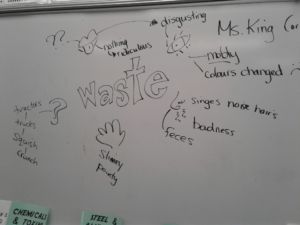 we humans do not have positive associations with waste! Thankfully, there are other hardworking creatures that would make the exact opposite brainstorm, if they had hands or arms. But they’re also too busy decomposing the organic waste in Ms. Curry’s Gr 6/7 class at JA Laird school that they don’t have time to be brainstorming. Dig down into this article to hear more.

During our History of Waste lesson, students learned about how humans have produced an increasingly diverse, complex, processed and mountainous amount of waste throughout our history. 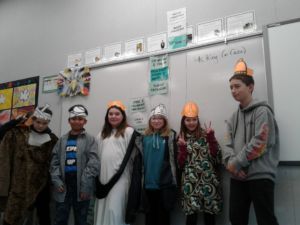 We even had some fun dressing up as these characters from history: hunter-gatherer, ancient farmer, ancient Greek, a hippie from the mid-1900’s, a miner from the Industrial Revolution, and a regular modern day man.

After learning that our waste continues to pile up at a rate faster than we humans are dealing with it, the class started a vermicompost (worm compost) in their classroom to help reduce their own garbage. In previous weeks, we had weighed and sorted the class garbage and had found that organic waste (e.g. orange peels, apple cores & banana peels) contributed significantly to the quantity of waste. We also learned that this type of ‘waste’ could actually be used to create ‘black gold’ – better known as worm castings. From waste to valuable resource – a quick and easy solution!

Thus students set to shredding newspaper, adding water and a bit of organic waste, and finally the stars of the show: the worms! Groundswell Network Society, which operates Invermere’s community greenhouse, was kind enough to donate a slithering mass of worms from their healthy vermicompost. Students will continue to monitor their worms and add moistened newspaper, organic food scraps, and a little bit of water. The worms will continue to quietly work away, turning food and newspaper into rich soil that the students can then use in their gardening program come spring! 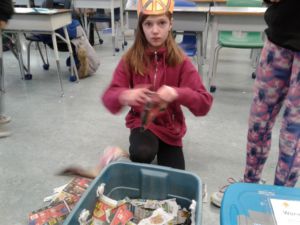 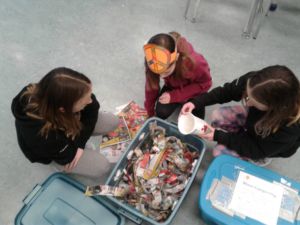