Sustainability was the theme of this week’s Beyond Recycling lesson at Begbie View Elementary school in Revelstoke. Though all of the students had heard of the word “sustainable”, we took part of the lesson to define the word so we could better understand what it means to live a sustainable life. We talked about the differences between “needs” and “wants”, and discussed how we need consider how choice we make in our lives will impact future generations. One concept we talked about is the “Seven Generation Sustainability” First Nation’s Great Law from the Constitution of the Iroquois Nations; being mindful of seven generations (~140 years) into the future is a long time to think about!

Another part of the lesson involved the students making an outline of 5 different parts of the world map (Canada/USA, Latin America, Europe, Africa, and Asia) using string. We then demonstrated how many people live in different parts of world by putting the appropriate number of students in each part of the world, with 1 student representing approximately 352 million people. Only one student ended up in Canada/USA, while majority of the students stood in the Asia area. 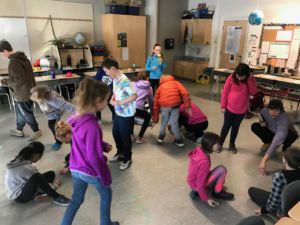 We then wanted to find out if energy consumption is evenly distributed around the world. To demonstrate this, one person from each part of the world  was given a bag of candies, where each candy represented a “barrel of oil” that is consumed by people in that region/year. It was clear to the students that energy consumption is not evenly distributed around the world, since the one person in Canada/USA used 54 “barrels of oil”, and the 11 students in Asia, had to share 10 “barrels of oil”. 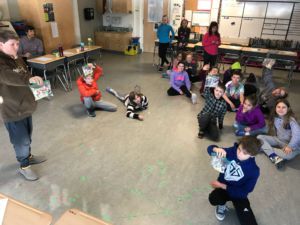 At the end of the lesson, the class talked about ways that we can all live more sustainably, such as using what we have, borrowing or swapping things with friends, and only buying new as a last resort.

At the start of the lesson, we looked on a website that provides a real-time count of the current world population, and when we looked again at the end of the lesson, the population had increased by 10,000 people…just within 75 mins! The students were mesmerized by the constantly changing, and hugely increasing, number on this website.